Yeshe Norbu Master Wan Ko 1 is the most venerable leader in Buddhist circle and the chief adept in orthodox Buddha dharma in the dharma realm. His Holiness is my Buddha Master who I respect the most and to whom I am indebted to. Ever since His Holiness started to propagate correct Buddha-dharma to save living beings, His Holiness has repeatedly announced and abided by an unusual rule that He does not accept any offerings. His Holiness only wants to spread correct Buddha-dharma, save living beings and participate in all charities associated with the correct dharma of Tathagata. His Holiness does not accept any offerings no matter if they are money, assets, or items at any value. On the other hand, His Holiness constantly puts the welfare and interest of living beings as His top priority. His Holiness is mindful of that and tirelessly and quietly contributes to people and benefits sentient beings with all of his own treasure and fortune without reservations. His Holiness brings to living beings and the entire Buddhist realm immeasurably vast and profound benefits of correct Buddhadharma and infinite blessings. Nevertheless, our majestic Master always considers Himself as one of the living beings. His Holiness defines Himself as a humble practitioner and does not allow anyone to promote Him. His Holiness constantly said, “I am a humble practitioner. I am and will always be an attendant to all living beings.” I would like to give some of my personal experiences as examples. These are all true facts.

“The Song Collection of Master Wan Ko Yee” is proof that my great Master implements Buddha wisdom of the Five Vidyas and the dharma voice of Tathagata in promoting dharma and saving living beings. It is also proof that the Master dedicates Himself unselfishly only to benefit sentient beings. It is extraordinary and very precious that His Holiness saves and benefits living beings without accepting anything in return. His Holiness has formally confirmed in writing that He decided to contribute all royalty of His dharma music and lyrics to Buddhist practices that save living beings. He said, “I do not need anything. Everything is for the benefit of living beings.” In addition, His Holiness stopped our promotion preparation for the debut of “The Song Collection” and said, “Do not promote me personally! Due to certain special karmic affinity, I am much honored to participate in part of the preparation, publication and distribution of ‘The Song Collection of Master Wan Ko Yee.’ ” I personally experienced and witnessed my Master’s holiness and morality in His propagation of correct Buddha-dharma and salvation of living beings. I was deeply moved.

There was a fellow male disciple in Chengdu, China, who used to be a blind vagrant. He lost sight in both of his eyes more than thirty years ago. He was so poor and deprived that he sang from street to street and begged for donations to support himself. One day, my Buddha Master ran into him and helped him out with great compassion. His Holiness not only cured the vagrant’s blindness in a very short period of time but also provided his family of four with money and items of necessity on a regular basis to alleviate his financial hardship and help his two children receive an education. The vagrant singer was so deeply moved and thankful that he composed many folk songs and dedicated them to the Master, praising His immeasurable compassion and the divine merits of Buddhahood. The tunes and lyrics were very touching. Later on, I recorded these songs and was about to publish and promote them. I had an audience with my Buddha Master and reported the project to His Holiness. His Holiness stopped me from doing it. The reason was very simple. It was what His Holiness had said before, “Do not promote me personally!”

My Buddha Master’s teachings through His words and conduct have become the guidelines and models that I follow to stay motivated in learning Buddhism and self-cultivation. I want to make a resolution that I will always consider myself as a humble Buddhist disciple and practitioner just like my Buddha Master. I will always be mindful of that in the aspects of my conduct, speech and thoughts. The three karmas of mine will be corresponding to those of my Buddha Master’s. Therefore, I decided to be ordained to become a bhikkhuni and follow the teachings of my great Buddha Master. I will unselfishly contribute all I have for the cause of selfenlightenment and enlightening others, propagating correct Buddha-dharma and benefiting living beings.

My majestic Buddha Master is the most extraordinary Buddha in the history of Buddhism who truly came from the Buddha Lands. His Holiness has been praised by the Bodhisattvas and Buddhas from the ten directions with great joy. His Holiness has been leading living beings from the dharma realm to practice and uphold the correct Buddha-dharma of Samyaksambodhi. His Holiness’s Buddha wisdom and Five Vidyas are magnificent and wonderful. His Holiness manifests his virtuous merits and Buddha-dharma without any hindrance. Various Buddhist sects and schools of Exoteric and Esoteric Buddhism have respectfully followed and relied upon the Buddha Master. His Holiness is truly the most majestic Buddha that came to save and liberate all living beings, and bring to the world happiness, auspiciousness, peace, prosperity and great future. However, I feel most disappointed and saddest that I have not seen my great Buddha Master for nine years. I do not know when I will get the chance to have an audience with him and prostrate myself in front of him. I miss my Buddha Master a lot. Great Heavens! Please give me an opportunity.

Buddhist disciple with a heart of humility, 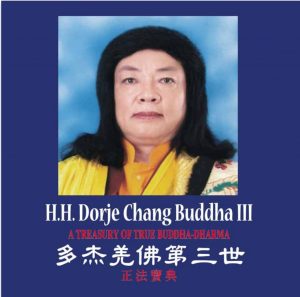